The classic 14 days Annapurna Circuit Trekking also well-known as Round Annapurna Trekking via Throng La Pass Trek; has long been so popular amongst trekkers.  The region is considered to be one of the world’s great treks. Annapurna Mountain range of central Nepal with the total length of the route varies between 160-230 km (100-145 mi), depending where the motor transportation is used and where the trek is ended. The trek rises to an altitude of 5,416m on the Thorung La pass, touching the edge of the Tibetan plateau. Annapurna circuit trek route crosses two different river valleys and encircles the Annapurna massif, crossing Thorung La Pass (5416m), the highest pass on this trail. Basically all trekkers hike the route counter clockwise, as then the daily altitude gain is slower and crossing the high Thorong La pass is easier and safer.

The mountain scenery, seen at close quarters includes the Annapurna Massif (Annapurna I-IV), Dhaulagiri, Machhapuchhre, Manaslu, Gangapurna/7455m and Tilicho Peak/7134m. Numerous peaks of 6000-8000m in elevation rise from the Annapurna range. Now from recent years, the trek starts from Dharapani in the Marshyangdi river valley and concludes in the Kali Gandaki river valley. Besisahar can be reached after a seven hour drive from Kathmandu. And jeep ride to Dharapani or Chame is available in dry season and taking jeep from Besi sahar to Chame shortens the trip so this trek can be done within 10 days if you are a good walker in the mountain. The trail passes along paddy fields and into subtropical forests, several waterfalls and gigantic cliffs, and various villages. Annapurna Circuit has often been voted as the best long distance trek in the world, as it combined, in its old full form, a wide variety of climate zones from tropics at 600m asl to the arctic at 5416m asl at the Thorong La pass and cultural variety from Hindu villages at the low foothills to the Tibetan culture of Himalayan Manang Valley and lower Mustang. Continuing construction of a road has greatly shortened the trail and altered the feel of the villages, so the "best trek in the world" cannot be said to hold true anymore but still one can fully enjoy of this trip.

The Annapurna area was opened to foreign trekkers in 1977 after the disputes between CIA backed Khampa guerrillas operating form the area into Tibet, and the local populace and Nepal army were settled. The original trek started form the market town of Dhumre situated at the Kathmandu - Pokhara highway and ended in Pokhara, and took about 23 days to complete. Road construction started in early eighties both from Dhumre to the north and from Pokhara to the west and then up the Kali Gandaki valley. The road has now reached Chamje on the Marsyangdi river valley and all the way to Muktinath on the Kali Gandaki side. This means that out of the original 23 days only 5 walking days of the trek is still without a motor road. It is apparent that there will be a road around the whole Annapurna Massif before 2017. In places new trails and routes have been marked so that the road can be partly avoided. The existence of the road has nevertheless totally changed the area and the appearance and the atmosphere of the villages. Please note that this Annapurna circuit trekking itinerary is only for guidelines so this trip can be personalized as per your requirement.

The trip commences with drive to Besisahar from Kathmandu about 5 hours along to the Prithwi highway. We divert off the highway at the bustling town of Dumre and continue for a further one and half hours to Besisahar. After lunch we complete the drive to the road head at Syange (1100meters / 3608 ft) in the Marysandi Valley, overnight at tea house lodge with dinner.

A fantastic hike with such changes in landscape and a range of gradients is begins today. From Tal we head across the river and ascend steeply to finally reach the ridge top high above. We cross another suspension bridge before a continued ascent up a narrow and beautiful valley where, after rain, many spectacular waterfalls will flow. Just before camp at Tal the first village in Manang, we come over a small rise and enter a wide, flat valley with a long, silvery waterfall to the right.

Follow the trail verse crossing a wide, Marsyangdi valley. The trail then climbs a stone stairway to 1860m till another stairway. The journey continues making up and down to Dharapani at 1890m. There we find a stone entrance Chhorten typical of the Tibetan influenced villages from here northwards. We then visit the Bagarchhap at 2160m that offers the typical flat roofed stone houses of local Tibetans design although the village which is still in the transition zone before the dry highlands.

With regular bumpy and rocky trail climbs to Tyanja at 2360m, and then continues through forest, but near the river, to Kopar at 2590m. As we reach the Chame, the headquarter of the Manang district, we are pleased by the fine views of Annapurna II as you approach Chame and two small hot springs by the town.

Today our journey starts through deep forest in a steep and narrow valley, crosses a river on a long bridge at 2910m. We then cross another bridge at 3040m, from there the view of the soaring Paungda Danda rock face really begins to appear. From there the trail joins to climb to Pisang, which sprawls between 3200m and 3300m. We choose Upper Pisang for the better experience of traditional and cultural village and locals.

Today we continue through the drier upper part of the Manang district, cut off from the full effect of the monsoon by the Annapurna Range. People of this region, herd yaks and raise crops for part of the year besides, they also continue to enjoy special trading rights gained way back in 1784. Leaving Pisang, we have an alternate trails north and south of the Marsyangdi River which meet up again at Mungji. The southern route by Hongde, with its airstrip, at 3325m involves less climbing than the northern route via Ghyaru, though there are better views on the trail that follows the northern bank of the river. From Mungji, the trail continues past the picturesque but partially hidden village of Bryanga at 3475m to nearby Manang at 3500m.

When you come above 3500 meters from the sea level; it is vital to take as an acclimatization day so today we spend a day acclimatizing in Manang. The whole day we spend by doing some fine day walks and over viewing the magnificent views around the village and the day time is best to gain altitude. Many people go hiking to the ice lake or nearby excursions. At the end of the day, we come back to our accommodation and have a night rest.

After a hot breakfast; today we depart from Manang gently as altitude goes high and air is thinner, the trail makes an ascent of nearly 2000m toward Thorong la Pass. We make the climb gradually through Tenki, leaving the Marshyangdi Valley. Continuing along the Jarsang Khola Valley, we get to Ledar at 4200m, there we see the vegetations steadily more sparse.

The track descends to cross the river at 4310m we then climb up to Phedi at 4420m. At High Camp on the elevation of 4600m, we can recently found some good Guesthouses built. Your overnight stay will be there.

The journey from Phedi “foot of the hill” or at the foot to the 5416m Thorong La pass, begins the day. We then make the climb steeply that is regularly used and easy to follow. However, the problem may arise due to the altitude and snow. It often causes terrible problem to cross the pass if it is covered by snow. About four hours climb up to the pass marked by the Chortens and prayer flags. As you reach the top, you are rewarded by the magnificent view from the top.

Marph is a nice settlements of more than 80 houses of Thakali people. It has also 1 significant Buddhist monastery, and one apple gardens. If you are interested to see how apple brandy is produced than can be seen and can be bought in nearby Tukche, you will be taken there.

We take a local bus or jeep to Tatopani today from Marpha to Tatopani meaning “Hot Spring” in Nepali. You can rejoice the natural hot bath here after the tiring big Himalaya hike over Thorong La. Nepalses believe that the body ache and bone and vein related diseases like Arthritis are healed if you soak in hot spring. Overnight in Tatopani.

Today is a bit of hard and long day for hiking up to Ghorepani with about 50-60 degree slope up via Ghara, Shikha and Chitre the Braman and Magar Indigenous peoples settlements. Lunch on the way and overnight at teahouse lodge at Ghorepani is set.

Early morning trip to Poon hill (3210m.) to catch the sunrise view over Mt. Dhaulagiri , Tukuche Peak Nilgiri, Varaha Shikhar , Mt. Annapurna I , Lamjung Himal and other several snowcapped mountain peaks of Annapurna and Dhaulagiri ranges. After breakfast trek to Birethanti with 6-7 hours walking then drive to Pokhara 42km that takes 1.5 hours. Overnight in Pokhara. The trip comes to end with your Guide in Himalaya. Trip concludes and farewell friend.

We are local tour and trekking operator based in Kathmandu so we guaranty small private group departures any dates that suits your date and time. Please kindly contact us for your customized departure date, itinerary and the price. Thank you and Namaste! 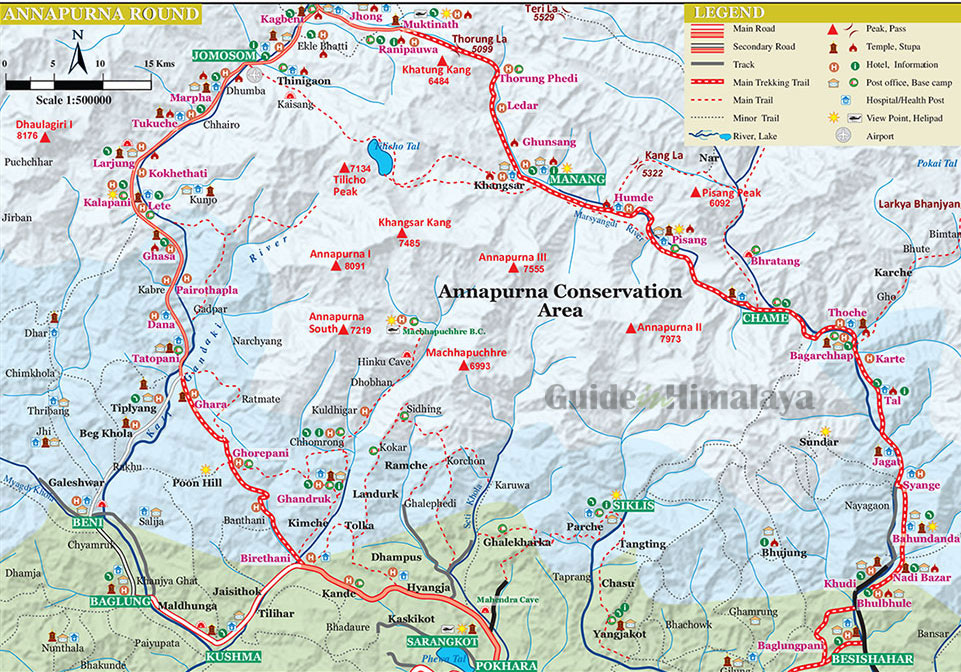 Note: This trip can be personalized as per your requirements that meet your time frame. The trip price will be according to Deluxe, Standard, Budget and group size so please kindly provide us your details for tailor made program.